Home → Blog → The App Store ‘Race To The Bottom’ Is Real

The App Store ‘Race To The Bottom’ Is Real

Developers often complain of a “race to the bottom” in the app stores. What they mean is that price competition forces their hand in terms of price strategy.

New data from Flurry shows that the race to the bottom is real.

Prices are dropping lower and lower as new entrants launch free apps in the hopes of climbing the download charts and becoming the next runaway app hit. That makes it more difficult for app publishers who hope to price their app $.99 at higher.

The result? When they do think about monetization, many developers feel forced to turn to ads or promote in-app purchases, or simply hope that their free app will become popular enough to become an acquisition target.

Consumers might love the perceived value of “free” apps, but in fact they are often downloading an app cluttered by ads and distracting requests to purchase premium features (or an app that may be discontinued when its technology is bought by a larger company).

Flurry’s data is for the Apple App Store. But judging by its data for average app price across different app platforms — $.06 for Android apps, compared to $.19 for iPhone apps — it’s even more of a problem on Google’s platform. 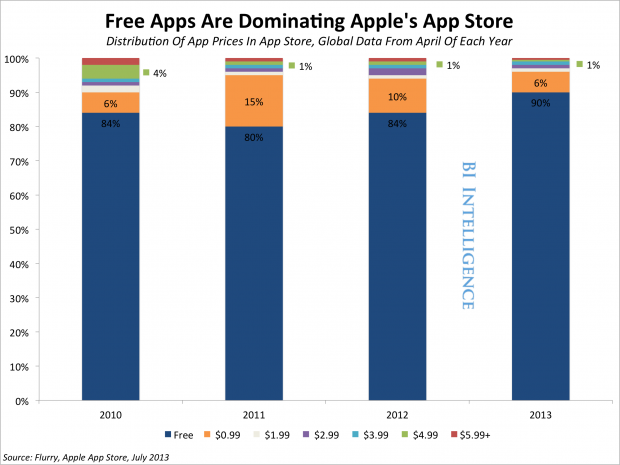 Here’s the data for average app price on the three largest app platforms. 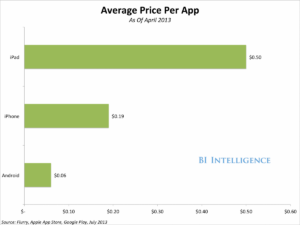