AirStash is a Wireless USB Drive For Your iPhone or iPad 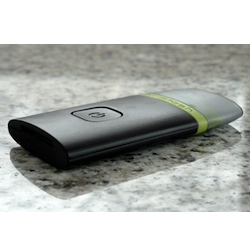 The AirStash has been around for a while, however it’s being re-launched at CES 2011 with a few tweaks and the promise of a new app coming later in the month.  The AirStash is a USB flash drive which uses removable SD cards for storage, that creates its own Wi-Fi network ready for your iPhone, iPad or just about any other wireless-capable device to connect to.

Once you’re connected, you can stream video and music or view photos, and the latest WebDAV enhancement makes it possible to wirelessly save and then share documents created on your iPad in Pages, Numbers, Keynote or other similar apps.  The AirStash can be used to store all these files too, a useful feature given the size of most digital copies of movies these days.

The SD card can be a maximum of 32GB, and the AirStash itself doesn’t cost anything to use, has its own rechargeable battery, password protection and even supports up to eight devices at the same time.

The new application is waiting to be approved by Apple, and is designed with photographers in mind, as it allows browsing and bulk import of photos directly to the iPad from your camera’s SD card.

You can buy the AirStash direct from the manufacturers website, where it costs $99, but you’ll have to add your own SD card.  It’s only available in the US and Canada at the moment, but AirStash say they’ll be adding other countries soon.  If you grab one now, you’ll have to wait for a firmware update to activate the WebDAV feature.